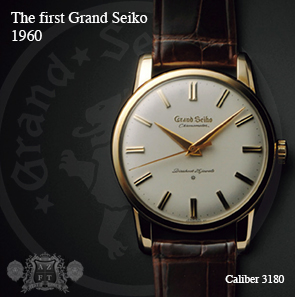 On December 18th, 1960, Grand Seiko's first watch was introduced at Suwa Seikosha in the Nagano prefecture in central Japan.  The caliber 3180 found in the first Grand Seiko was where the legend of high accuracy originated.  A hand-wound caliber with 25 jewels, 18,000 bph and carrying the inscription of "chronometer" on the dial, this timepiece signified that it complied with all the international standards of precision.  The case was gold filled with the lion emblem engraved on the case back, symbolizing Grand Seiko as "King of Watches".  Since 1960, the Grand Seiko Lion has grace the case back of each and every timepiece.

Only one other Grand Seiko timepiece was inscribed with the word "chronometer" on the dial, which was their second model from 1964, the 57GS "Self-Dater", which was the first with a calendar function.  Shortly after this piece was introduced, the "chronometer" portion was removed from the dial and the Grand Seiko Standard was implemented.  By 1966, the standard was implemented on all Grand Seiko watches, which set a level of precision and reliability higher than any yet achieved by Seiko and higher than the International Chronometer standards.  Today's Grand Seiko standard involves more tests in more positions and at more temperatures than today's chronometer standard.

Though times change and Seiko's watchmaking technology has evolved rapidly, the spirit and essence of Grand Seiko has remained the same. For over fifty years, Grand Seiko has stood for the same simple yet exacting ideals.  And so it will be for the next fifty years. And beyond.

Arizona Fine Time is a Premier US Authorized Dealer for Grand Seiko. Shipping only available to United States and US trust territories.