At the beginning of February 2015, Seiko Japan announced their first collaboration with Giorgetto Giugiaro on their widely popular Seiko Astron GPS Solar Chronograph.  This holds a special place in many ways for Seiko fans...  Not only is Giorgetto Giugiaro a world acclaimed car designer, he also worked with Seiko during the era of their first analog quartz chronographs in the early 1980's.  It seems only fitting that this renowned designer who collaborated with Seiko on breakthrough technology of the 80's, is contributing to their latest breakthrough, the Seiko Astron GPS Solar Chronograph.

Giugiaro's work with Seiko consisted of two analog designs using Seiko's 7A28 caliber, one style with the off center case design and one with a unique block type pusher system, both of which gained tremendous popularity from their exposure in the movie Aliens in 1986.  The other two designs were LCD digital pieces using the A828 movement.  One with the domed dial tilted 20° to the right, the the other inspired by a seat belt, with a strap long enough to go around a bike handle.  All of these designs are chronographs, and were launched in 1983.

The SSE037's inspiration obviously comes from automobiles, more so, sporty race cars.   Giugiaro has an incredible portfolio when it comes to automotive design, including work with Alfa Romeo, Lamborghini, Ferrari, BMW, and many more.  One of his most popular designs was the DeLorean DMC-12 featured in the movie Back to the Future.  His DeLorean design helped him reach an even broader audience for his incredible design work.

Seiko's new Astron GPS Chronograph SSE037 will be the first Astron GPS to feature numerals as opposed to indexes, giving it the sportier look but also aiding in legibility.  Another contributing factor is the color coded sub dials using green color for GPS functions, and red accents for the chronograph.  The 44.8mm case will be made of Bright Titanium with black hard coating, finished in the Zaratsu polishing technique.  The bracelet is mostly black hard coated titanium, but also has white ceramic center links.  The crown will also have a white ceramic accent.

The case back design of the SSE037 will also have the sports car concept implemented, mimicking the wheels with the Giugiaro Design logo in the center, and engraved to its limited edition number out of 5,000 pieces produced.

Included with the purchase of SSE037 will be a special edition box that includes a black "tricolor" leather strap that has red white and green accents.  This strap will also include a 3 fold black coated deployment buckle that allows the wearer to customize their new Guigiaro Design Seiko Astron GPS Solar Chronograph.

The new Seiko Astron GPS Solar Chronograph Giugiaro Design 2015 Limited Edition SSE037 is scheduled to launch in Japan in July.  No word has come yet whether or not the piece will come to the USA, but everyone here at AZ Fine Time is hoping so!  This collaboration is something we have longed for and expect it to come at some point in the near future.  Only time will tell.  For further information regarding the SSE037, stay tuned to AZ Fine Time as we go to the Baselworld Fair in Basel, Switzerland starting March 19th to see all the great and amazing new timepieces launched by Seiko! 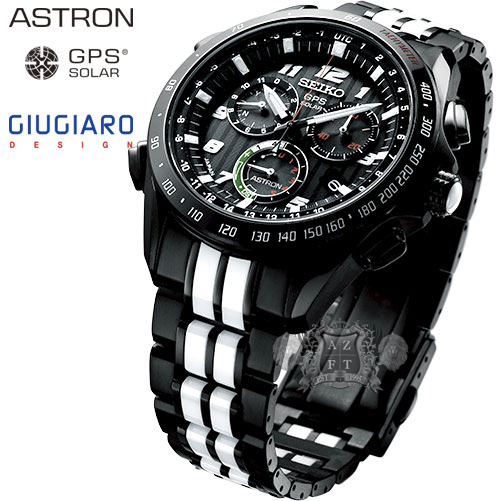