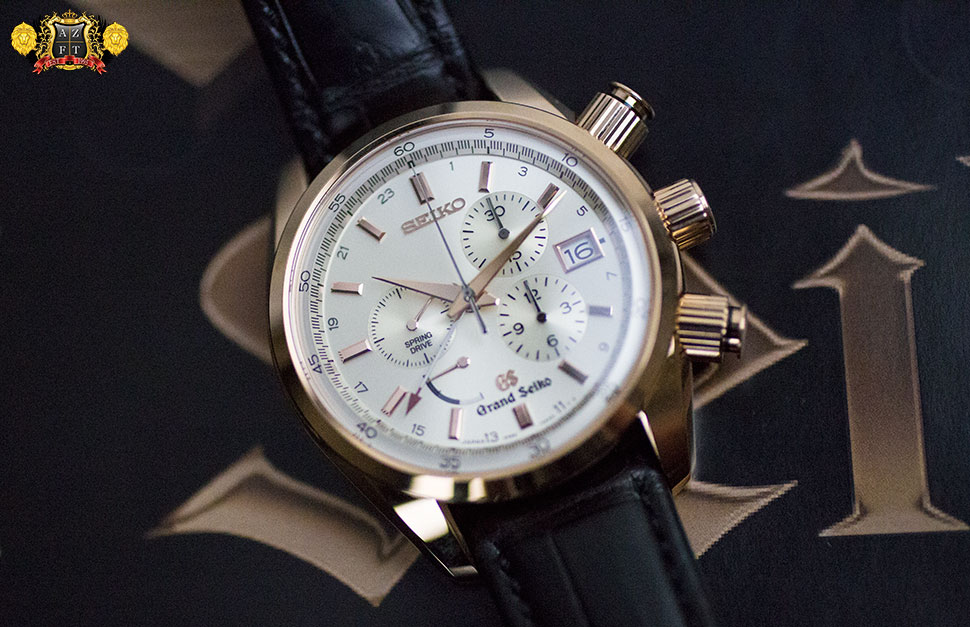 Arizona Fine Time is extremely proud to bring you a hands on review of a Grand Seiko that, while it has been out for a number of years, has never before been seen in the US market.  One of the finest utilitarian movements in the Grand Seiko line up is their 9R86 Spring Drive Chronograph GMT, with 416 components, 50 jewels and a power reserve of 72 hours, including standard use of the chronograph feature and using only one barrel.  Take this incredible caliber, and house it inside an immaculately mirror finished, 43.5mm 18k pink gold case.  We now introduce you to the incredibly rare and luxurious, SBGC004. 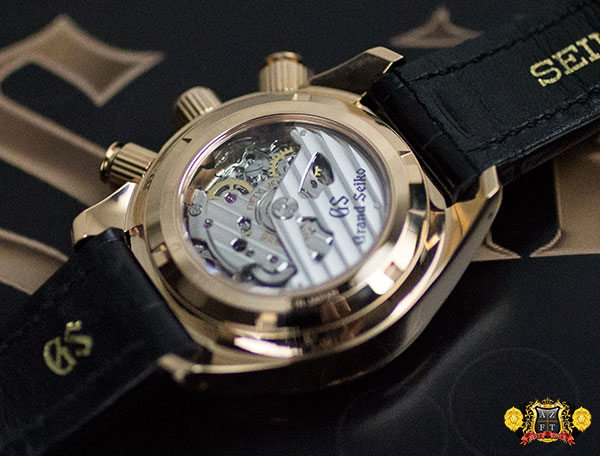 Seiko's history with self-winding mechanical chronograph's is extensive.  Japan's first chronograph was made by Seikosha in 1941, a pocket watch that could record time intervals up to 30 minutes.  They debuted their first self-winding wrist watch chronograph in 1969, which could arguably be one of the worlds first.  Three self-winding chrono's were released that year, the Caliber 11 by Heuer, the El Primero by Zenith/Movado, and Seiko's 6139.  Seiko executed a precise measuring instrument, which was the worlds first to utilize a vertical clutch and column wheel system.  This allows for a continuous roll into the chronographs performance when starting as opposed to jumping due to the vertical clutch, and a solid feeling, precise start, stop and reset action due to the column wheel.  This movement also included their "Magic Lever System" (created in 1959) to provide a more efficient winding system.  Since the debut of the 6139 in 1969, Seiko has only used these systems in their luxury mechanical chronographs. 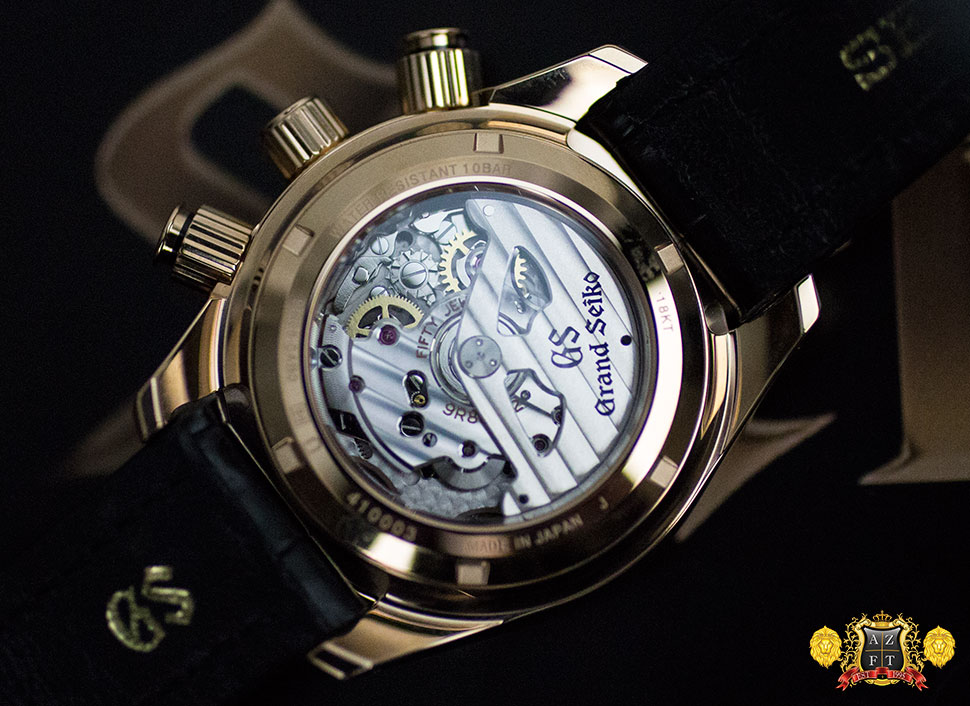 Among other achievements in precision measuring devices such as creating the first quartz watch in 1969, Seiko also developed the worlds first analog quartz chronograph in 1983.   I mention this relative to the later achievement of Spring Drive, the hybrid best explained as a quartz regulated mechanical movement.  From its conception by young engineer Yoshikazu Akahane in 1977, Spring Drive was destined to be the worlds most accurate watch powered by a mainspring.  The concept was inspired by a bicycle rolling down a hill and using the brake to control the speed.  With Spring Drive, the mainspring is  your sole source of power, and unwinds in a barrel much like any other mechanical watch.  As the spring unwinds, the energy is transmitted to the gear train to move the hands, but also becomes a source of electricity.  At the end of the gear train, the power relayed over from the mainspring spins a gliding wheel/rotor that generates the minute amount of electricity to power an integrated-circuit and a quartz crystal. 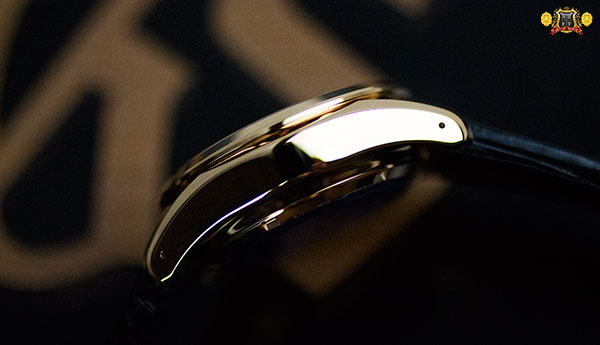 The development of the IC itself was incredible, and only requires 25 nano watts (1 nano watt is one billionth of 1 watt) of power to operate.  In a traditional mechanical watch, the mainsprings unwinding is controlled by a wheel rocking back forth on a small spring called the hairspring.  The swinging motion creates the fluttering of the second hand and the spring itself is one of the most sensitive parts of the movement.  In Spring Drive, the wheel is instead controlled by an electro-magnetic brake that makes no contact with a uni-directional gliding wheel, and gets the timing information from the quartz crystal translated through the IC allowing the glide wheel to rotate exactly 8 times per second.  The wheel spinning in only one direction and being braked with no contact creates the beautiful glide of Spring Drive, along with maintaining quartz like accuracy of +/- 15 seconds per month. 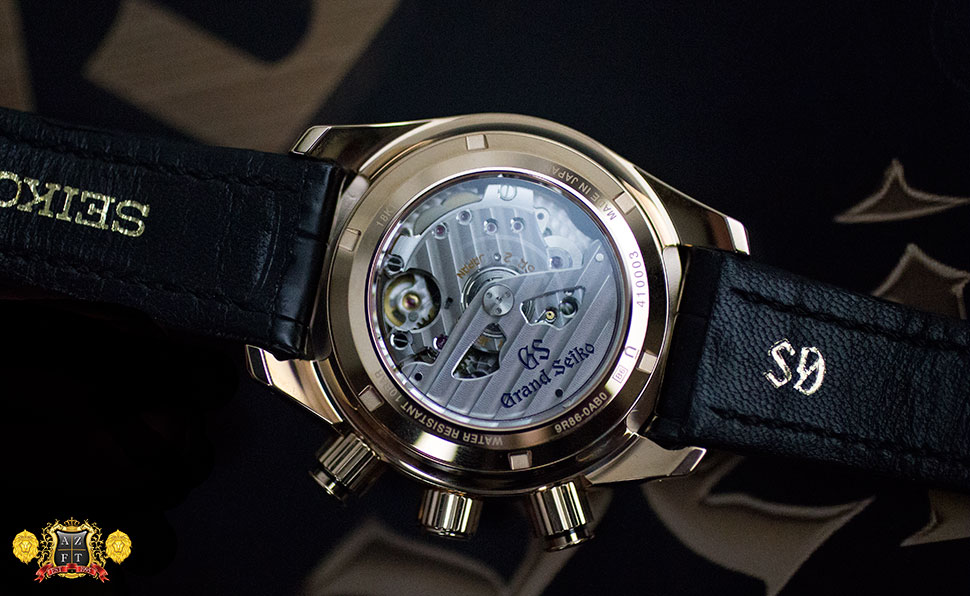 The journey to creating Spring Drive was a lengthy one.  Mr. Akahane was employed by Suwa Seikosha in 1971 as a technical specialist.  It was 1977 that the thought of creating this quartz regulated mechanical movement, with the first prototype finalized in 1982.  The second prototype was not until 1993, with the next arriving in 1997.  At Basleworld Fair in 1998, the announcement of the manual wind Spring Drive was official.  1999 was the year that Spring Drive hand-wind was available for sale in limited edition form in the Seiko and Credor brand.  1999 was also the year of the first self-winding prototype which followed with a second in 2001, and in 2003, a third.  In 2004, the Spring Drive automatic finally debuted with a 72 hour power reserve to be delivered in 2005.  The addition of a widely popular complication to Spring Drive did not occur until 2007, which was the chronograph along with a GMT feature. 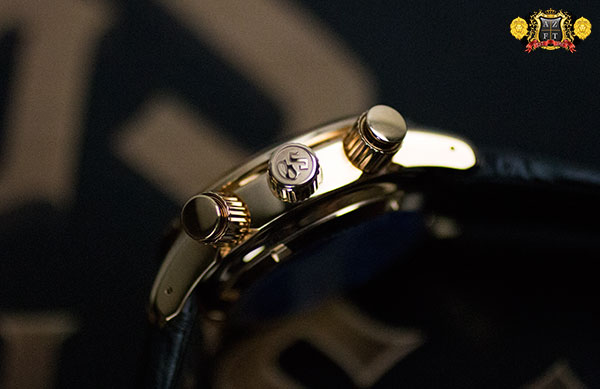 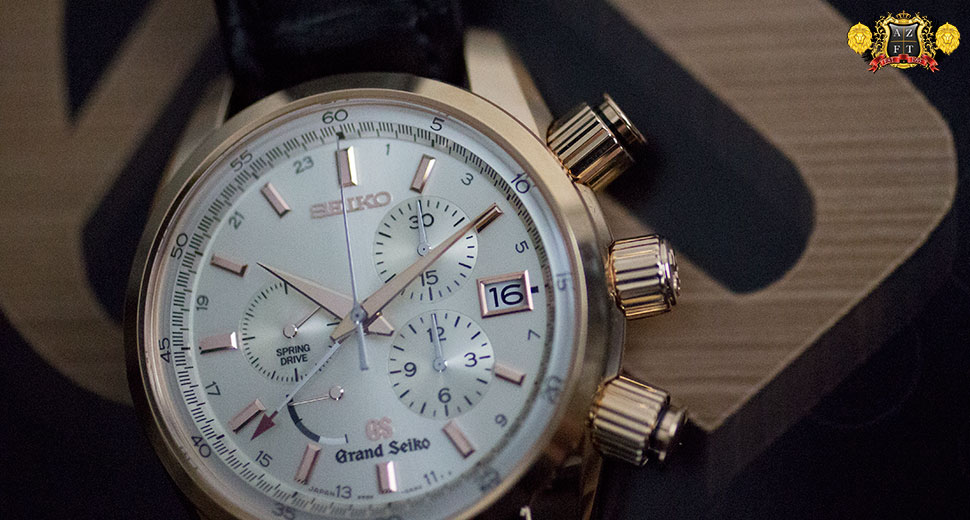 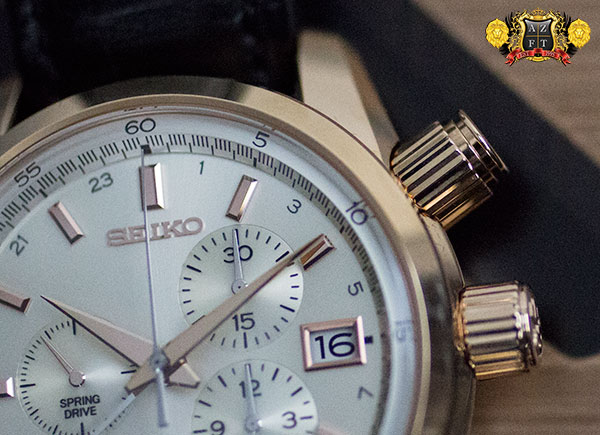 The design for the use of this chronograph is  incredibly detailed.   Starting with the large styling of the pushers, with a unique screw locking type system that uses a pipe raising outward to lock, and retracted inward to unlock.  Once the locking pipe has been retracted back into the screw, you can see a marking line on the pusher indicating the chronograph is ready to be operated.  Seiko has adopted another unique system when actually depressing the chronograph pusher.  This system called the "Ready-Set-Go" is inspired by a camera shutter, pushing it lightly (almost half way depressed) when bracing for the start, and activating the chronograph at the precise start of the event to be timed.  This system along with the 8 point column wheel dramatically reduces the margin of error when timing, while the vertical clutch allows for the smooth roll into the measurement, without the error of a jumping start.

The layout for the chronograph's sub dials are parted to the right hand side of the dial, giving total separation from the from the continuous small seconds and power reserve on the left hand side of the dial.  This allows for easy legibility for the chronographs registers, without impairing the legibility of the actual timekeeping.  The center seconds counter for the chronograph is made to extend far out to the outer edge of the 1/5th a second counter of the dial.  It is actually exactly within 0.15mm of the counter.  After extensive testing, Seiko concluded this is the exact distance needed for the human eye to easily read the measurement precisely.  This along with the bold and long hour hands, which have five-facet razor sharp edged give distinct legibility in both continuous timekeeping and in chronograph measurement. 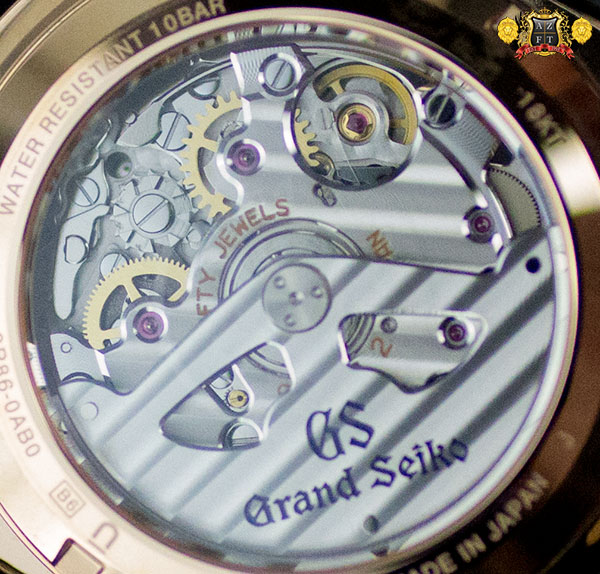 Due to the continuous fluid motion of Spring Drive, these chronograph's do not just measure in 1/5th of a second interval, but can be stopped even more exact due to the lack of ticking.  The 2:00 sub dial will measure your minutes when operating the chronograph, jumping from minute to minute as the second hand passes the 12:00 marker.  This again provides distinctly clear legibility in measurement.  To create clear legibility for the 12 hour counter at 4:00, the hand moves without jumping, to show whether you are in the first or second part of the 30 minute counter.  The hands used in the chronographs counters are all in stainless steel, while your power reserve and small seconds hands are in gold.  Needless to say, all aspects of the 9R86 movement are thoroughly thought through.

In addition to the chronograph, the 9R86 caliber also includes a GMT feature.  In all Spring Drive movements, the GMT hand is not independently controlled, but the hour hand is.  When the crown is pulled out to the first position, you can change the hour hand without deviating the precision timekeeping found in Spring Drive.  This allows for easy time adjustments while traveling, and your home time left to be seen in the 24 hour read out. 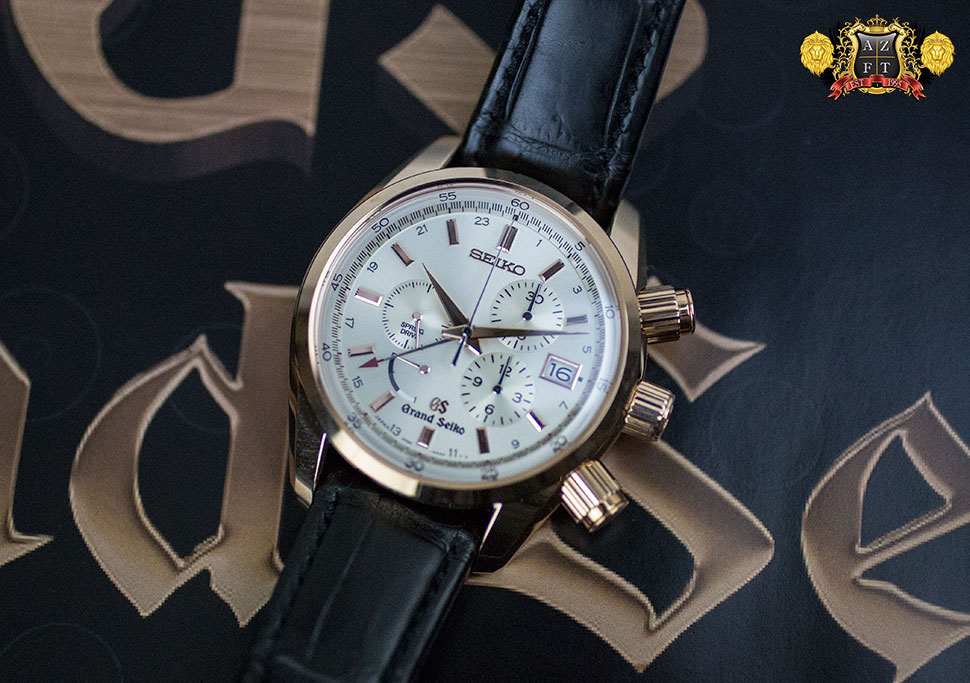 With all mentioned about this movement that makes it so unique, there is another factor contributing to its outstanding performance.  Seiko's in-house developed and manufactured mainspring Spron 510 is what powers this incredible caliber.  This highly resilient, heat and corrosion resistant alloy provides increased power and a 72 hour power reserve all with one mainspring, all in one barrel.  This includes continuous use of the chronograph, which is an amazing achievement as running the chronograph will typically deplete the power reserve faster.  This is achieved not just through the Spron material, but also by reducing the power loss in the gear train, create the low power consuming IC, and reduce loss of the magnetic power.  The 9R86 found within the SBGC004 is of course an exception to the typical mechanical chronograph by far. 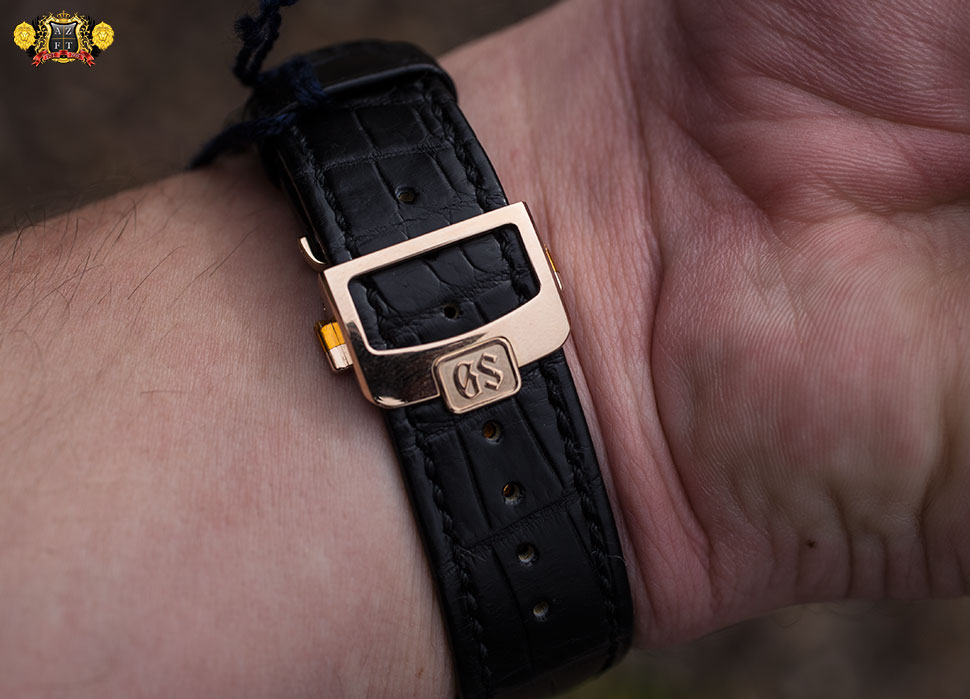 The SBGC004 measures out at 43.5mm wide not including the crown and pushers, 16.1mm thick including it's domed  high definition sapphire crystal with proprietary 99% clarity coating preventing glare.  The total weight of this Grand Seiko Chronograph is 172g, which is amazingly close to the stainless steel versions on bracelet (only 15g difference), though this model is on a crocodile leather strap with 18k pink gold 3 fold deployment buckle. 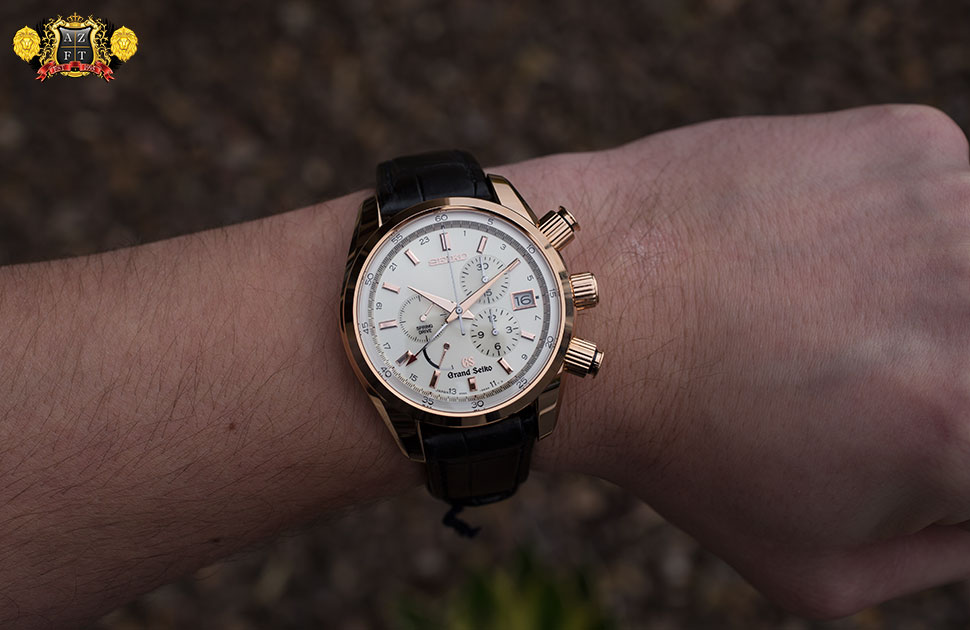 The overall design of the case is very well executed fits incredibly well to the wrist.  At barely 50mm length from lug to lug, and a curvature that hugs your wrist, the comfort in wearing is excellent, even on a smaller wrist.  The angles implemented to the case are a part of Seiko's design element implemented in the 1960's and still hold true today.  A 13° angle on the case sides tapers to be more narrow as approaching contact with the wrist, while this helps the timepiece to fit more comfortable to the wrist, but also gives an impressive appearance just looking at the case sides. 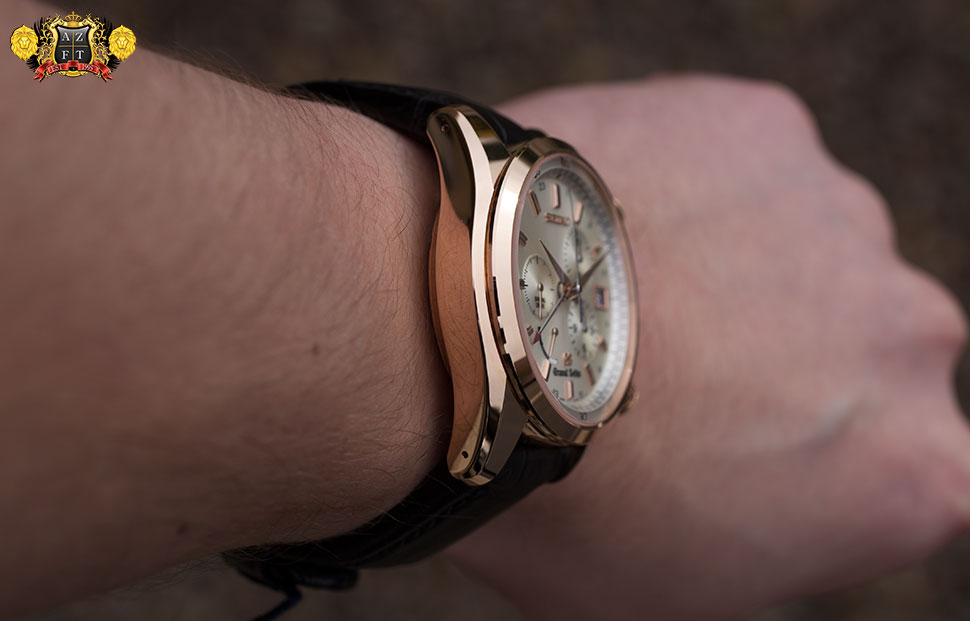 The SBGC004 is something you are highly unlikely to see in this country, unless of course you are in Arizona. 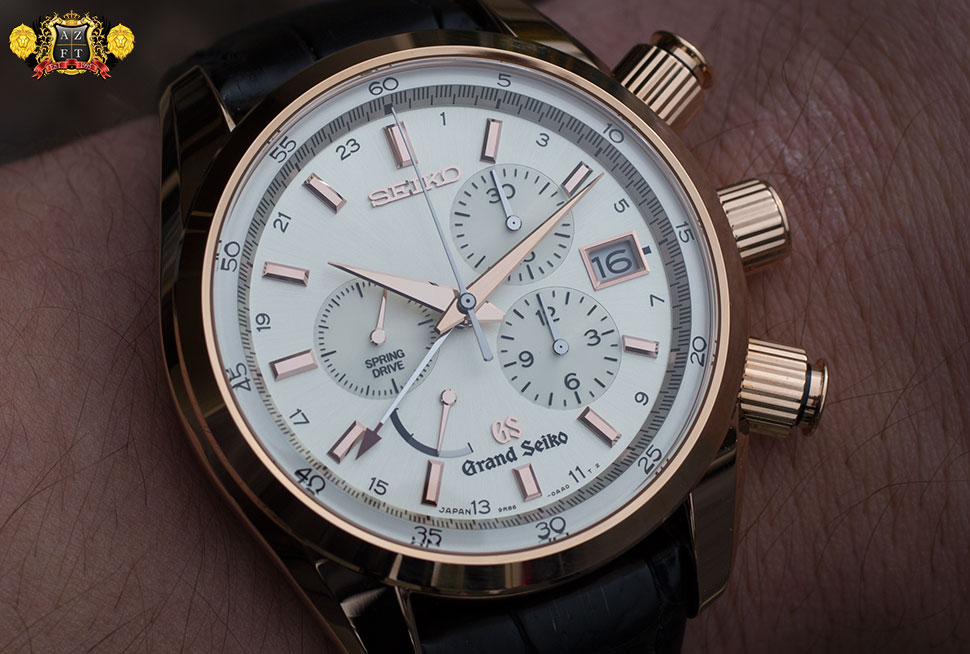