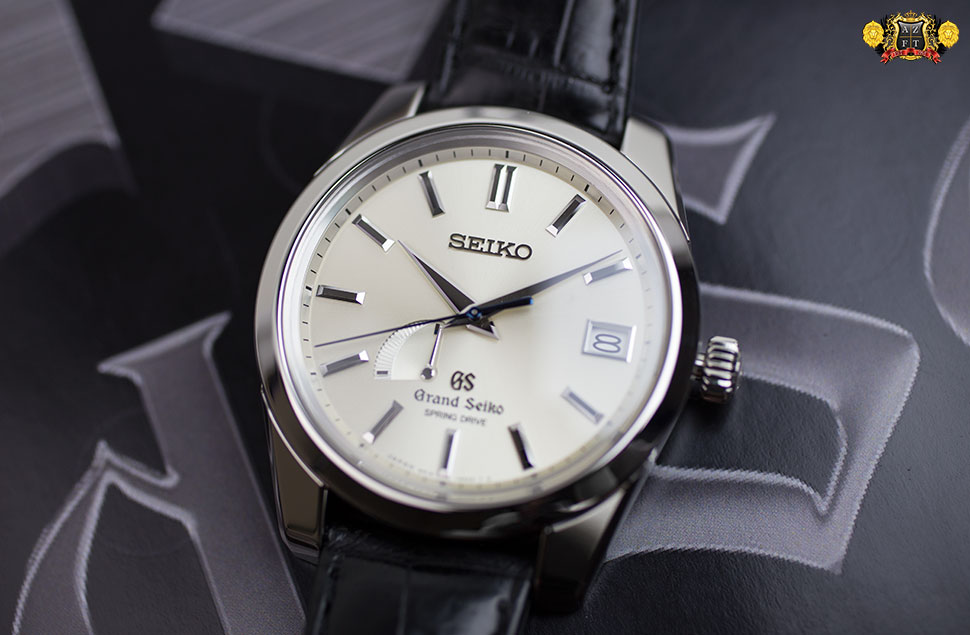 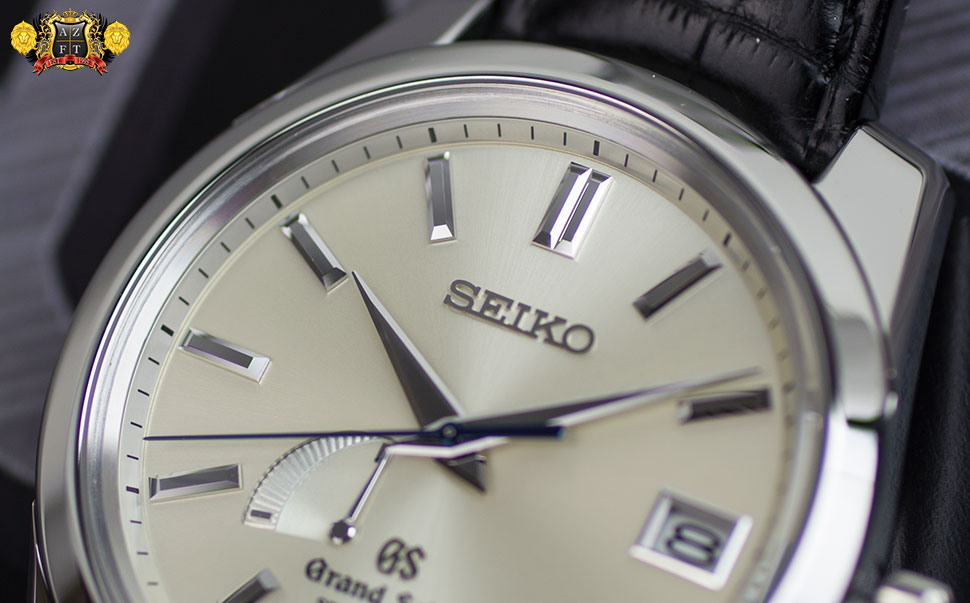 Chronometer branded Grand Seiko's are not a common find.  The first Grand Seiko 3180 was labeled as a chronometer, acknowledging it met all the international standards in order to qualify for the name.  Seiko's introduction of the Self-Dater 57GS was the second to use Chronometer in the same respect on their 5722A caliber, but the second generation of the watch later removed the chronometer text from the dial being the first to use the GS Standard in 1966 with the 5722B caliber. 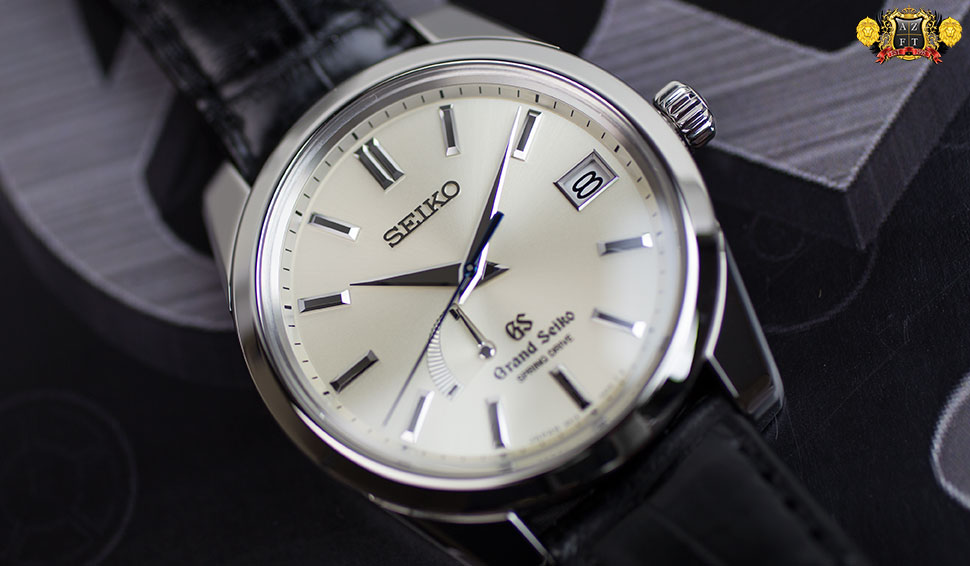 For 2014, Seiko introduced 5 models that were reinterpretations on the Grand Seiko Self-Dater 57GS model,  2 of which were quartz with an astounding +/- 5 second per year accuracy rating, and 3 Spring Drive models with an even more amazing +/- 10 seconds a month rating, even though the watch is powered by a mainspring.  Today we highlight the most illusive Spring Drive to pay tribute to the 50 year anniversary of the 57GS "Self-Dater" model, the Platinum 950 SBGA107, limited to only 50 pieces for the world! 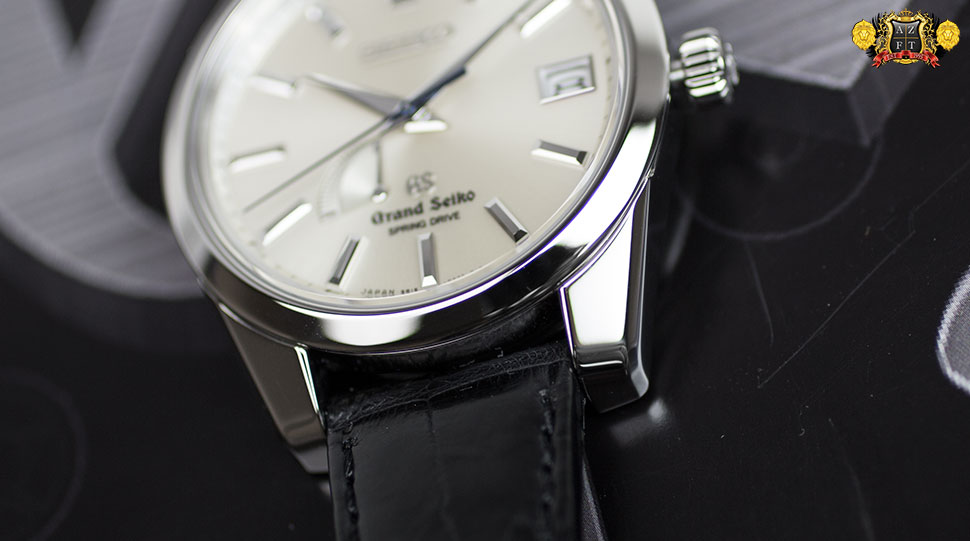 The case design implemented on the original Self-Dater brought a new element to Grand Seiko aesthetics, featuring a broader lug, with an elegantly designed flat surface front and at the edge, leading down to the case sides.  At the tips of the lugs, you will see a beautifully rounded edge that is not only on its flat surface front, but also on the faceted edge, exemplifying the difficulty it takes to achieve the mirror finish on the rounded attributes.  This mirror finish, known as Zaratsu polishing, was first implemented on the 57GS Self-Dater, and is the only finish used on Grand Seiko to this day.

There are only a small handful of craftsmen who are capable of achieving this finish, which is completely done by hand.  With the use of a small tin wheel, and extensive labor, this mirror finish that is brought the to the platinum case of this SBGA107 is distortion free and a trait that has distinctly become renowned with Grand Seiko.  The SBGA107 is completely mirror finished, with no brushed attributes on its case or bezel at all, making it glimmer even more then most GS.  The case measures out at 39.9mm wide and 13.2mm thick, with a fairly hefty weight of 105g, though it is on a crocodile strap. 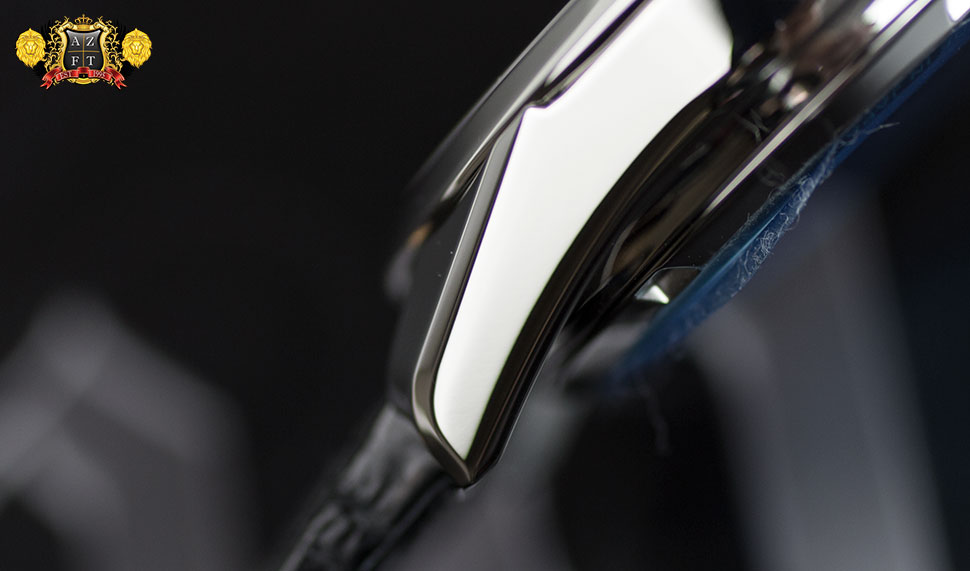 The dial for the SBGA107 is a radial finished champagne color, the most labor intensive to create in the Grand Seiko line up.  This 12 step process includes numerous polishing techniques, silver and gold plating techniques and a special sun ray finishing technique labeled "F-17".  These combined together create a unique tone with both silver and gold attributes that vary in color depending on the amount of light that is exposed to the dial. 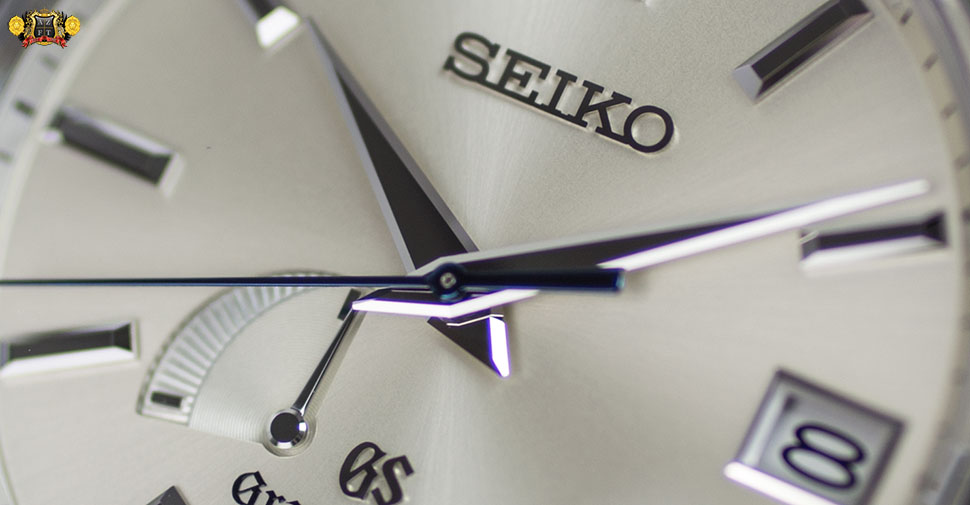 Other characteristics of the dial that make Grand Seiko so unique are the five facet index markers, also hand polished, glimmering even minutes amount of light creating legibility in dark scenarios.  The hands also have the multi-facet cut trait in order to reach the same objective.  The heat treated blue second hand is long and reaches out to the far edge of the seconds/minute track creating legibility, making for a quick read, even at a glance. 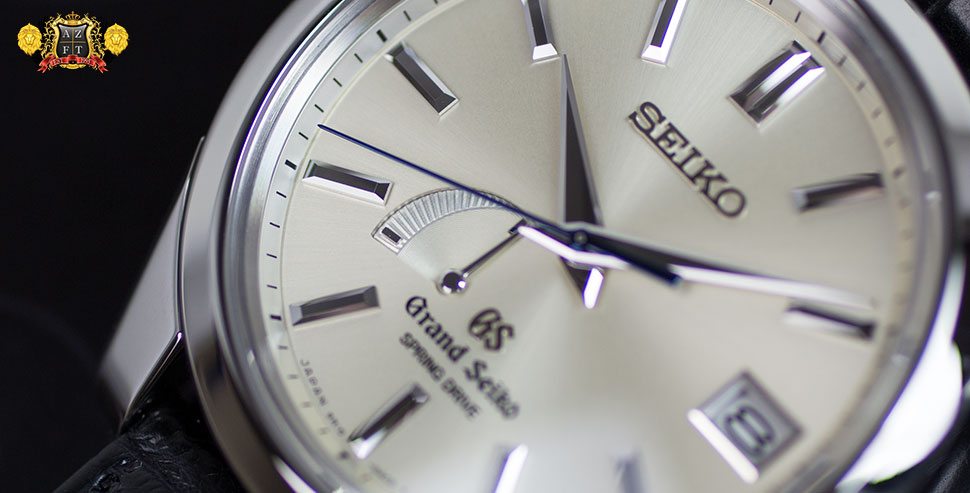 To add to the legibility, Seiko utilizes a sapphire crystal, which is surprisingly manufactured in house.  For those who don't know, Seiko actually has an entire optics division that manufactures and creates lenses and eyewear.  The technology from this division is implemented to the watch division, allowing Seiko to create domed, yet distortion free sapphire crystals.  Also, the proprietary anti-reflective coating used is clear, creating no blue glare when the light hits it.  This leads to another attribute of the superior legibility in Grand Seiko. 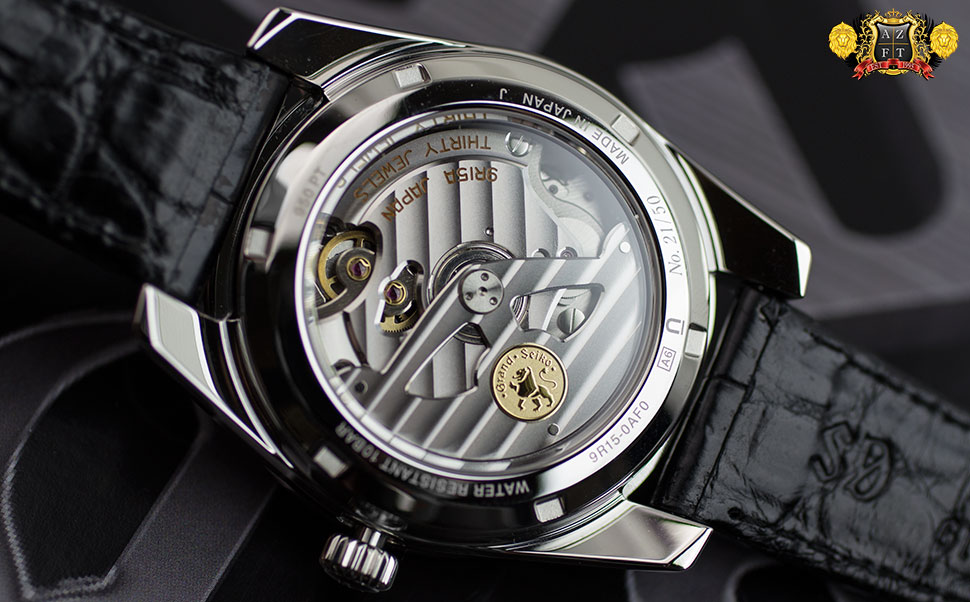 Visible through the sapphire case back is Seiko's in house designed, manufactured, and developed Spring Drive caliber.  Though Spring Drive is no ordinary movement in general, this Spring Drive is an especially rare movement.  The 9R15 caliber is one that first appeared for Grand Seiko's 50th Anniversary in 2010.  The 9R15 has only been available in a small handful of models, all extremely limited in production.  This is, of course, with good reason. 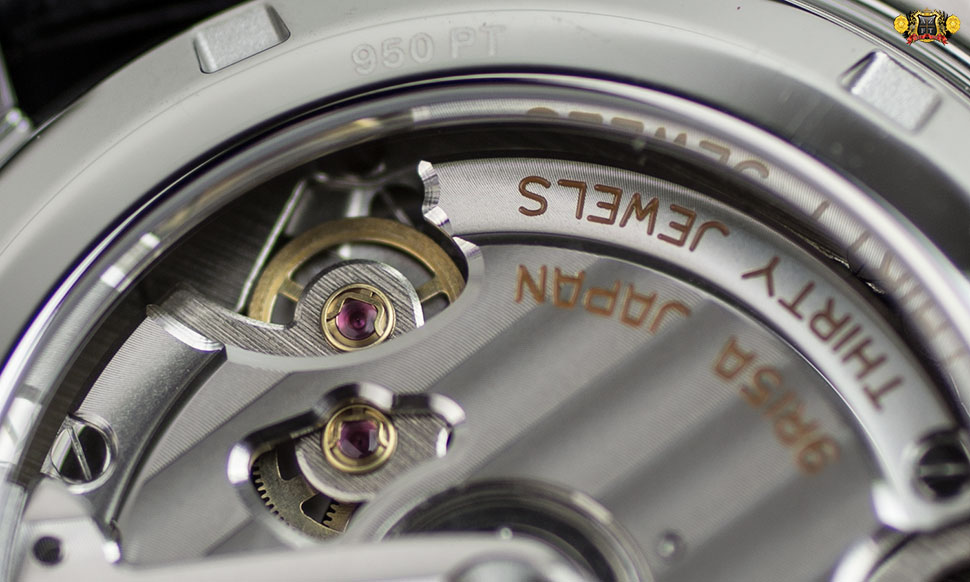 To explain Spring Drive is difficult in only a few words.  The creation of a mechanical movement that expresses the true motion of time in a fluid, uni-directional motion is an achievement that did not come easy.  Through the concept of bicycle rolling down a hill and using the brake to slow the speed, the concept of Spring Drive was born.  A young engineer by the name of Yoshikazu Akahane joined Seiko in 1971.  By 1977, the thought of this movement was conceived, and a 28 year journey to develop the one of the worlds finest, most accurate movements.  After over 600 prototypes, Spring Drive became a reality.

This movement utilizes a mainspring as it sole power source (meaning no battery and no storage of electricity).  The unwinding of the mainspring in its barrel provides movement to the gear train, as it would in any mechanical watch.  The difference lies in the escapement (or the regulating mechanism that controls the speed at which the mainspring unwinds).  A traditional escapement relies on a thin sensitive spring to rock a wheel back and forth, to control the unwinding.  Spring Drive, utilizes a wheel with no spring, that is instead controlled by an electro magnet.  Instead of rocking back and forth on a spring, the wheel rotates in one direction, and in turn generates 25 nano watts of electricity through a micro generator.  The electricity is used to power an integrated circuit and a quartz crystal.  The timing information from the quartz crystal is relayed through the IC and tells the electromagnet to allow the wheel to turn at precisely 8 times per second.  In the end, you have a second hand that glides perfectly smooth due to the uni-directional motion and keeps quartz like accuracy due to the timing information from the quartz crystal. 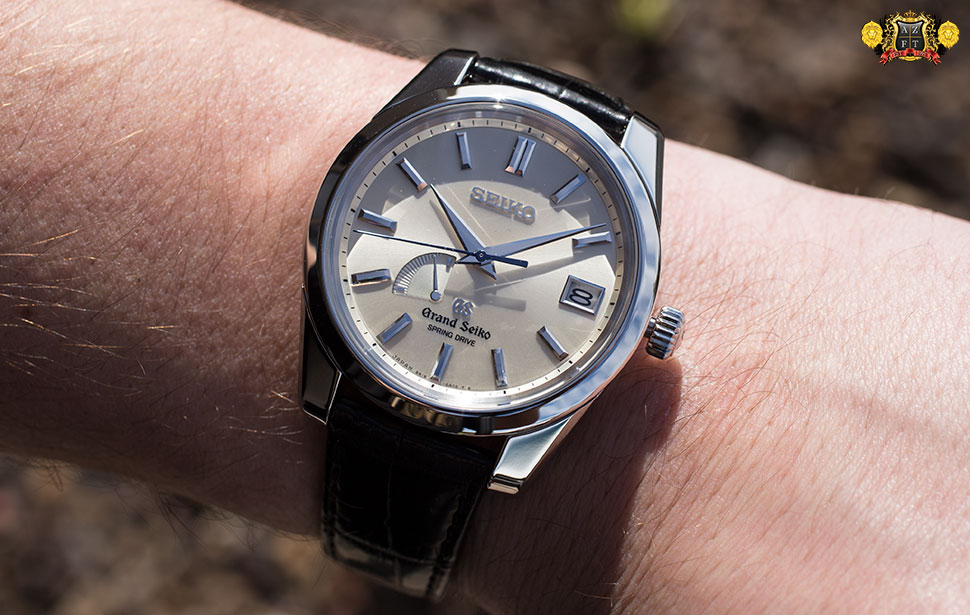 What makes the 9R15 so special is that, unlike the 9R65 which has a +/- 15 second per month accuracy rating (same as most quartz battery watches), the 9R15 has an impressive +/- 10 second per month accuracy rating.  Because Seiko grows their quartz crystals in house, this allows them to monitor and specially select ones with a higher performance.  With Spring Drive in general being the worlds most accurate movement powered by a mainspring, the 9R15 variant is the first to succeed the accuracy of the standard Spring Drive, something that could, of course, only be done by Seiko. 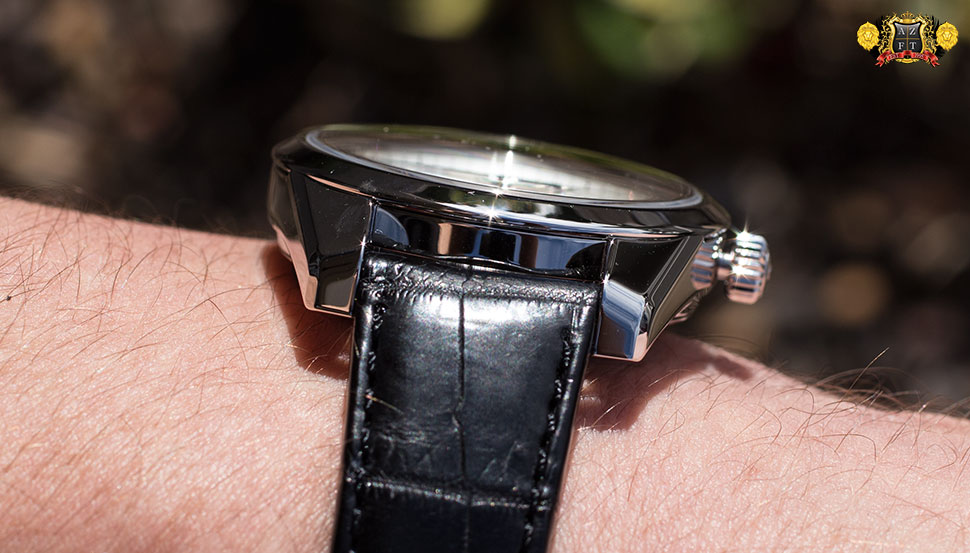 The 9R15 is manufactured and hand assembled at Seiko Epson's Shinshu studio in the Nagano prefecture in Japan, near Lake Suwa.  The original Self-Dater was also made by Suwa Seikosha, which is now the Seiko Epson division, back in 1964. 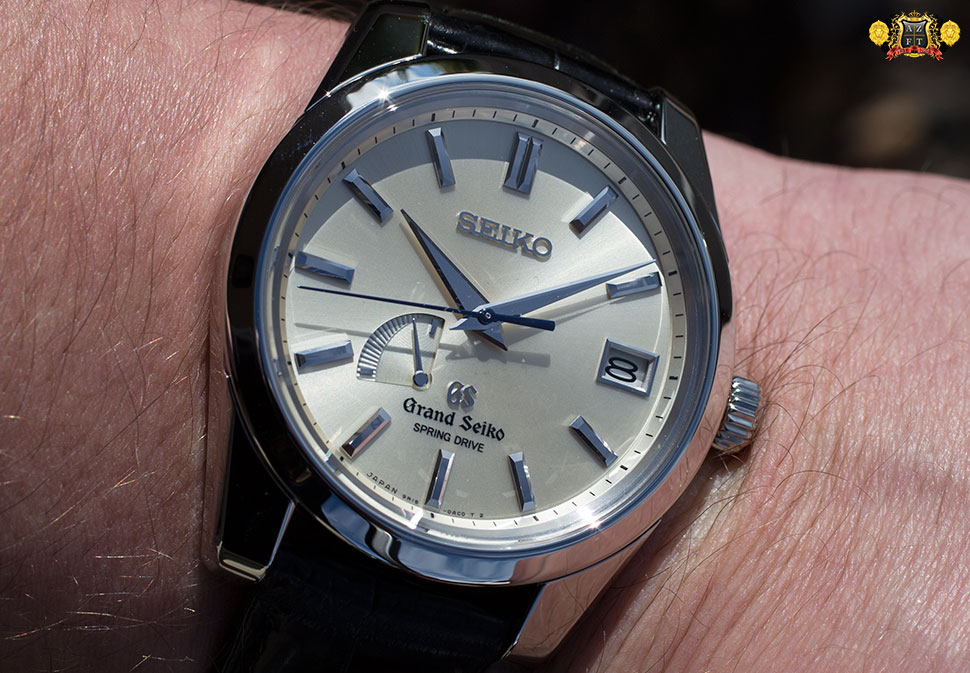 The Grand Seiko Historical Collection Self-Dater Limited Edition SBGA107 in platinum is now the most expensive Seiko to touch US soil at a retail of $34,500.  For more information, please call us at 1-800-486-3996. 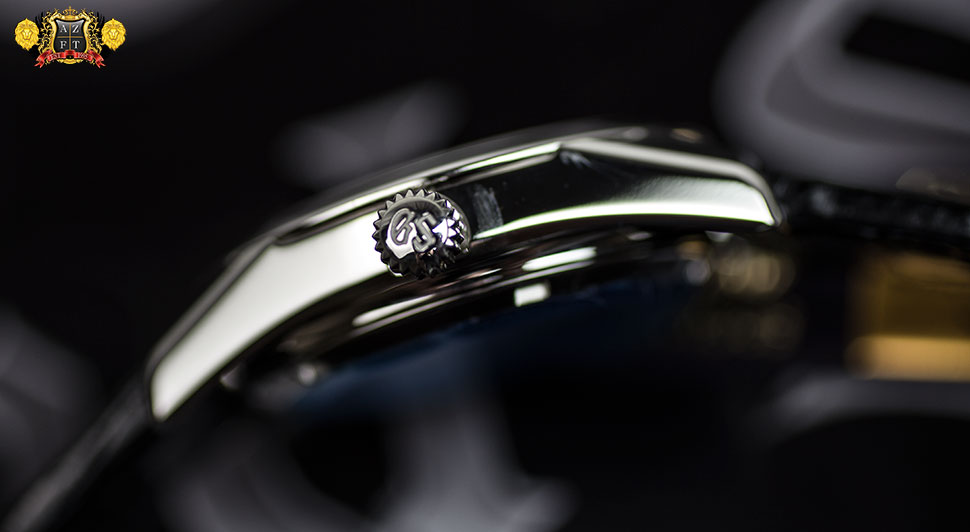 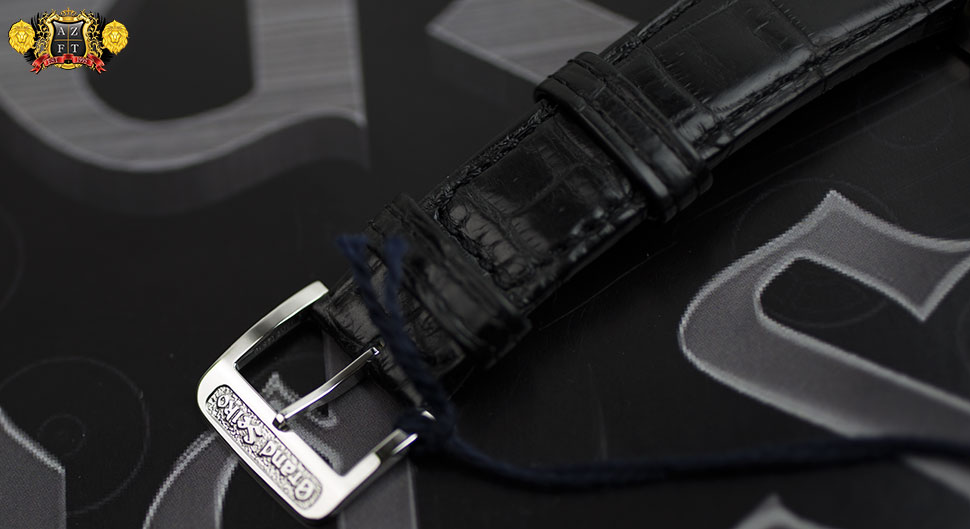 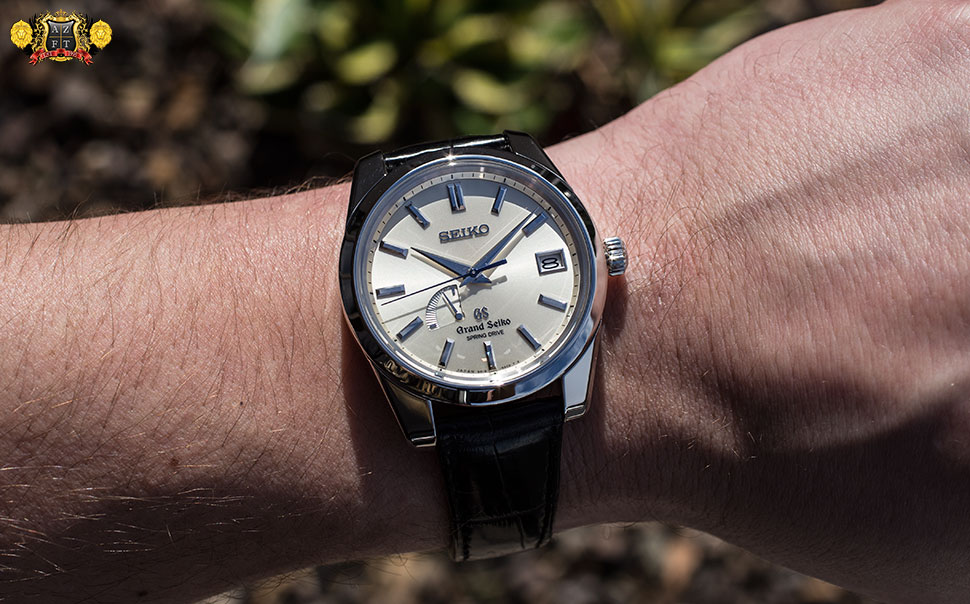 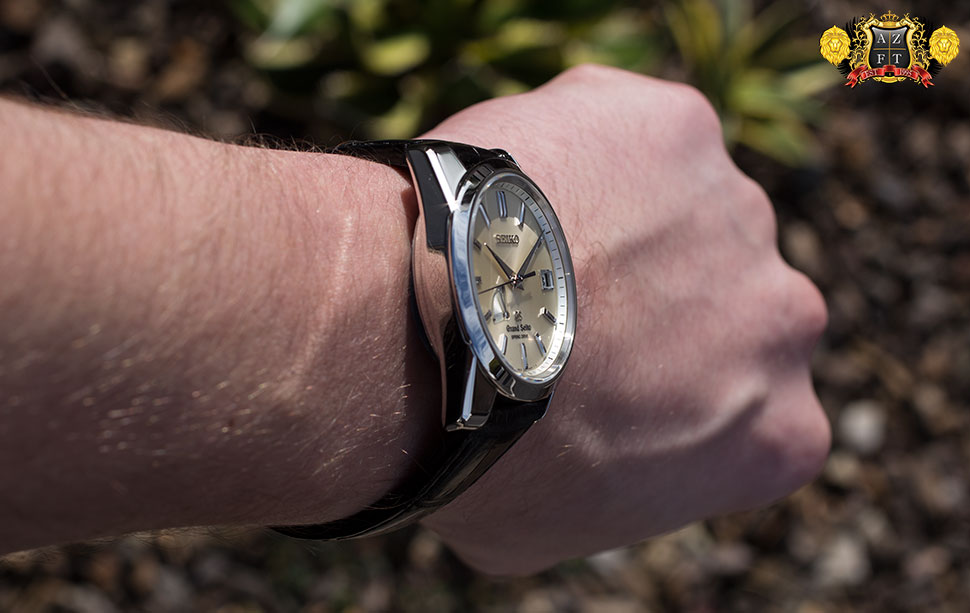