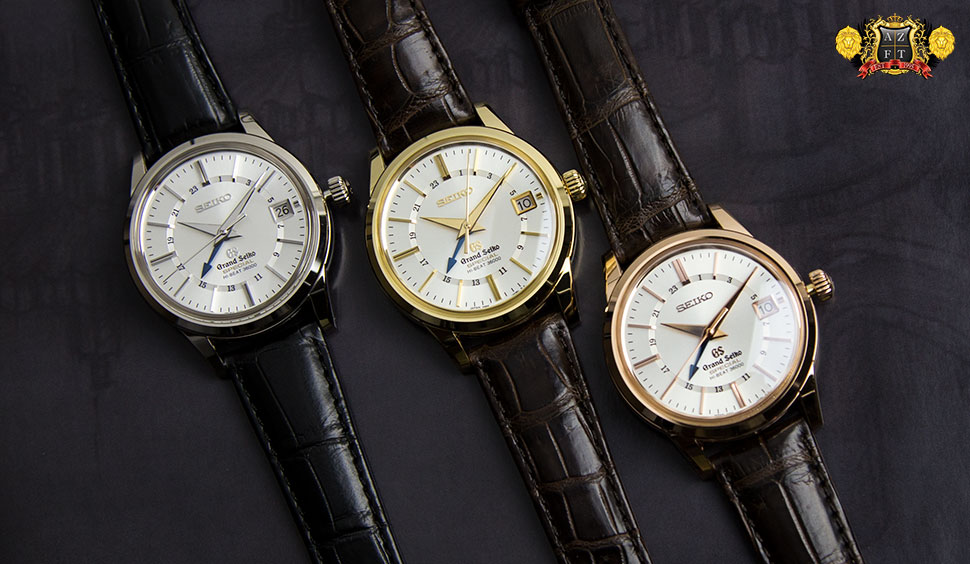 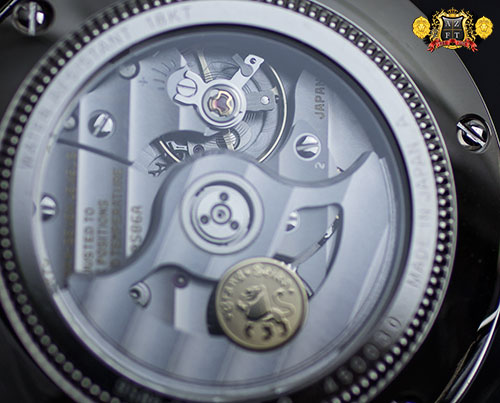 Five years ago in 2009, Seiko had introduced its first Hi-Beat caliber in nearly 41 years.  For this five year anniversary, Seiko introduced a whole new caliber to this line up.  The 2009 9S85 caliber with 36,000 bph escapement was evolved upon adding a new complication, a GMT, and labeling it the 9S86.  With 2 production models and 1 limited edition already released, we would like to introduce you to 3 different and very "SPECIAL" models of this new Hi-Beat GMT.  Today we bring you the Grand Seiko Hi-Beat Special GMT's in 18k white, yellow and pink gold, SBGJ007, SBGJ008, and SBGJ010.

Seiko's dedication to perfection started with Kintaro Hattori in 1881, but setting a new standard in precision really started to develop in the 1960's.  In 1960, Grand Seiko was developed.  This proved that Seiko's level of quality was more then worthy of its Swiss competitors, bearing the "Chronometer" label on its dial.  As years went on, Seiko started to participate in the Swiss Observatory Competitions in Neuchatel.  The first results in 1964 were not the greatest, with low ranking placements in the competitions.  As years passed, Seiko continuously improved and ranked higher and higher every year.

1968 was a very important year for Seiko.  They not only created their first automatic 10 beat caliber in the 61GS, but also won the first prize in the mechanical wrist chronometer category of the Geneva Observatory Competition in Switzerland. 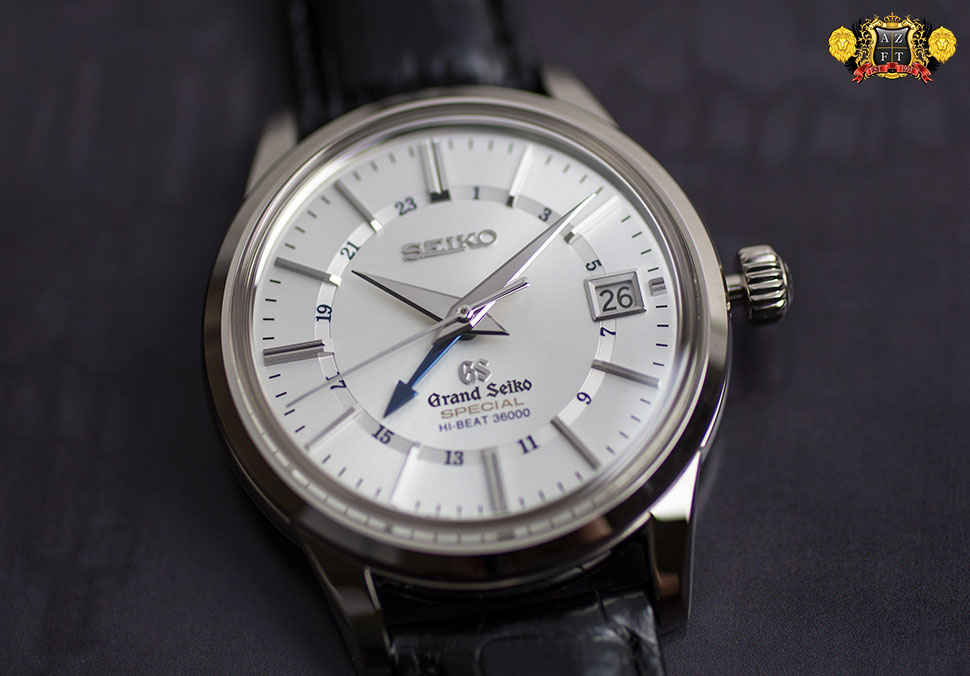 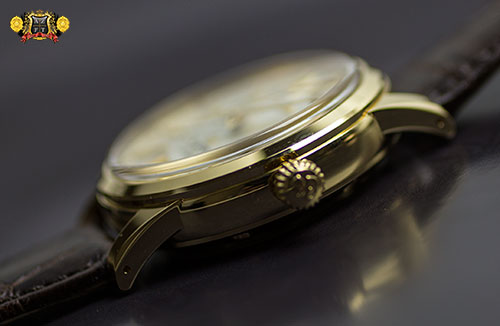 In the early 60's, Seiko decided to strive to achieve a higher level of watchmaking for Grand Seiko.  This meant, the internationally recognized "Chronometer" standards were no longer up to par for Seiko.  Not only that, but the term Chronometer was also no longer to be used by companies manufactured outside of Europe.  The Grand Seiko Standard was developed in 1966 surpassing the Chronometer and proving their dedication to perfection.

As if exceeding the Chronometer standard wasn't enough, Seiko started to beat their own standards for Grand Seiko.  In 1970, the first Grand Seiko Special standard debuted.  This first appeared in a variation of the 61GS which coincidentally was the first model to have the 10 beat self-winding caliber.  The "Special" standard succeeded the GS Standard's -3 to +5 second a day rating, having a -3 to +3 rating.  The only more precise testing standard found was Seiko's VFA (Very Fine Adjusted). 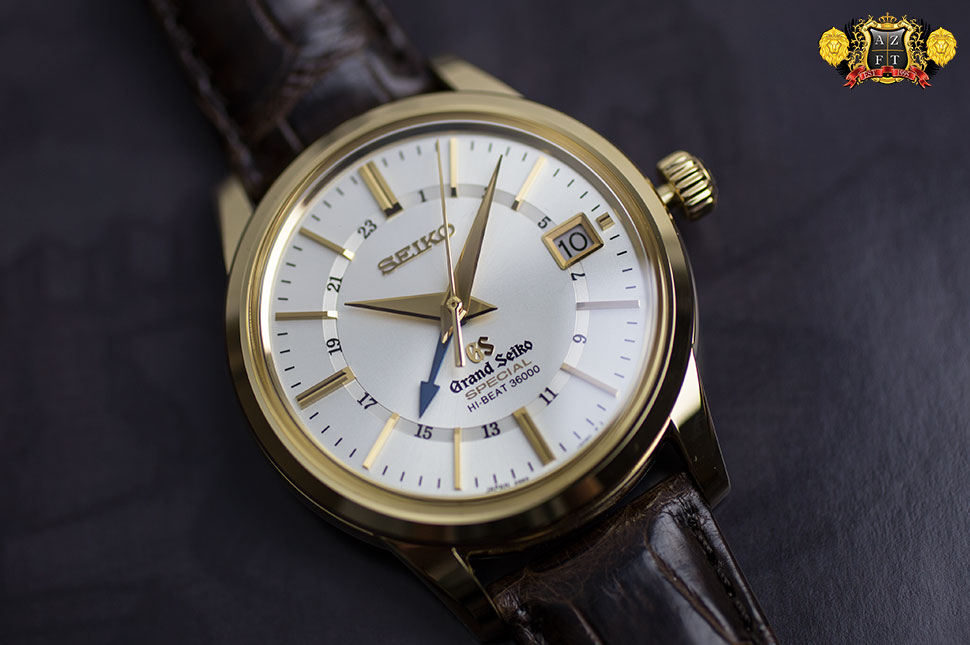 The current Grand Seiko Standard was implemented in 1998, and still exceeds Chronometer standards.  With a -3/+5 sec per day rating as opposed to -4/+6, 6 positions tested compared to 5, 2 temperature variation opposed to 1, and 17 days of testing compared to 15, the regular GS Standard is incredibly impressive.  In 2010, Seiko reintroduced the Hi-Beat Special for the very first time in the 9S8 series calibers for their 50th Anniversary.  This model boasted an even stricter rating of only -2/+4 sec per day rating.  The only other models to receive this "Special" rating were 3 different shades of 18k gold Hi-Beat models from 2012, the SBGH019, SBGH020 and SBGH022.

Now that you know how "SPECIAL" these movements truly are, we can get into the 9S86 Special's.  These 3 different variations all acheive the -2/+4 sec per day rating as you would find on the previous models, but now with an extra hand to indicate a secondary timezone.  Thanks to tremendous developments in Seiko's technology, the creation of Spron 610 alloy for the watches hairspring creates an incredibly resilient and durable regulation for this fast paced caliber.  Spron 530 is the alloy developed for the mainspring, also incredibly resilient, but providing the higher torque required to achieve the 10 advancements of the second hand per second, but also providing an impressive 55 hour power reserve.  Another impressive attribute to the 9S8 calibers is the escapement wheel and pallet fork being manufactured through MEMS technology.  Because of this, the parts can be made more precise, allowing to be lighter, smoother and better constructed parts.  The other advantage to this is that lubricants can be distributed throughout a longer course of time, creating longevity before servicing. 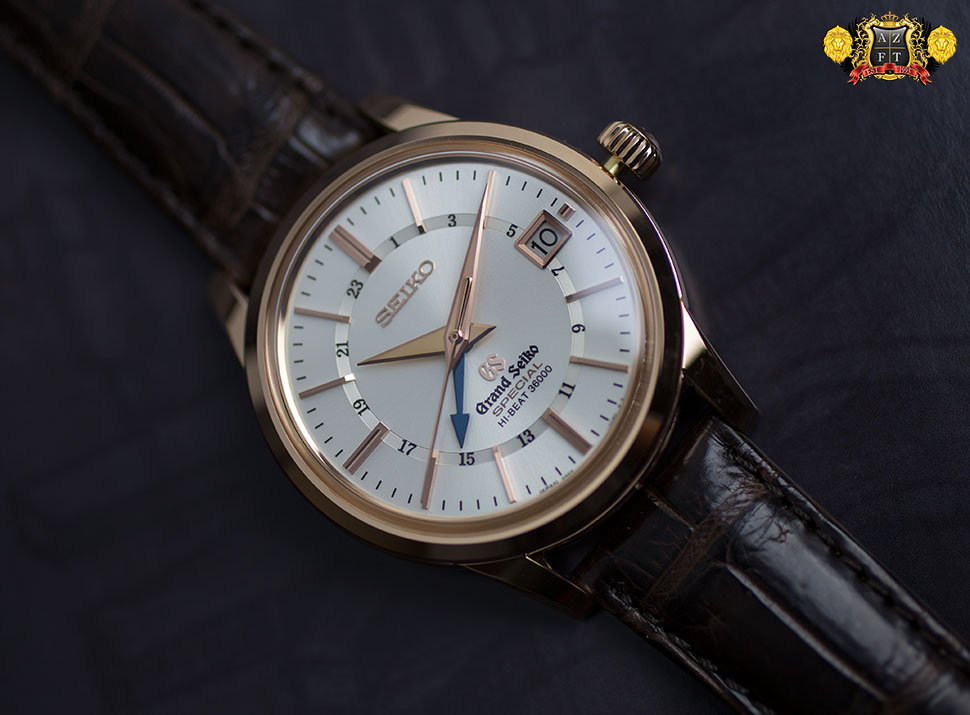 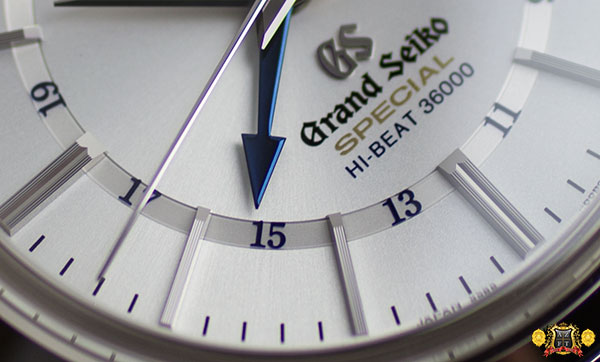 The GMT feature on these models allows the user to adjust the hour hand independently, creating no need to deviate it's accurate timekeeping.  The movements are marked for their significance with an 18k gold Grand Seiko Lion emblem on the rotor.  The lion emblem will be in yellow gold for both the white and yellow gold cases, with a pink gold emblem for the pink gold cased model.

The exterior design of these models are fairly reminiscent of the 28,800 bph GS GMT's (mainly SBGM021).  The case size is 39.5mm wide and 13.9mm thick, which is very similar aside from a 0.2mm difference in thickness.  The cases, of course, are finished in the Zaratsu polishing technique, which descends from the polishing of Katana blades to give them a mirror finish.  This finishing technique can only be achieved by hand, and very few craftsman are capable of accomplishing this work.  The distortion free finish on these 18k gold models is immaculate, creating an impressive sparkle that has become synonymous with Grand Seiko.

The dials bear some resemblance to the SBGM021, however, some new design elements have been added to these amazing pieces.  Every other hour markers for these Hi-Beat Special GMT's extend to the center of the dial where you will find your 24 hour counter for the blued GMT hand.  This along with the indexes and hands multiple diamond cut facets allow for incredible legibility, even in low light settings.  The dials of all 3 models is a silver sunburst radial finish, with complimenting colored hands, indexes, date window frames and logo's.  Another unique note, is the word "SPECIAL" on the dial is in the exact same font as found on the first Hi-Beat Special from 1970.

The crocodile straps for the yellow (SBGJ008) and pink gold (SBGJ010) models will be a dark brown color, while the white gold (SBGJ007) will have a black crocodile strap.  All 3 models have 18k tang buckles, matching in color to the cases. 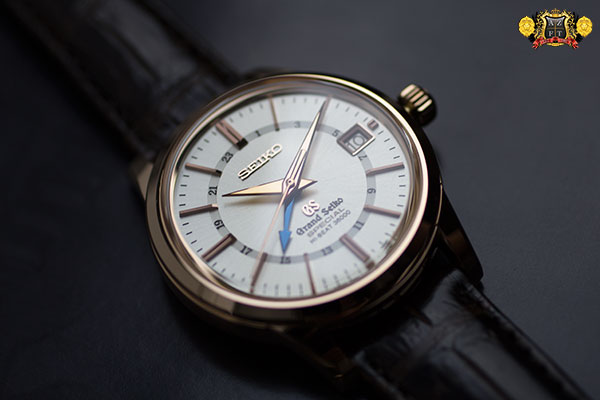 Only 200 total pieces can be produced annually, which includes all 3 shades of gold (essentially 66 pieces of each).  Seiko only entrusts these Hi-Beat Special models to be adjusted by the most experienced craftsmen at Shizukuishi Watch Studio in Morioka Japan.  They are the reason behind why such an enhanced performance can be achieved.

These are going to be in extremely limited availability in the US market, and are likely to only be available this year as we have seen in previous models.  The MSRP on the white gold SBGJ007 will be $21,000, while the yellow gold SBGJ008 and pink gold SBGJ010 will have an MSRP of $20,000.  This is truly an incredible price point for a timepiece in 18k gold in general, but then ad the craftsmanship, accuracy and the fact in is made entirley in-house, it is an incredible value. 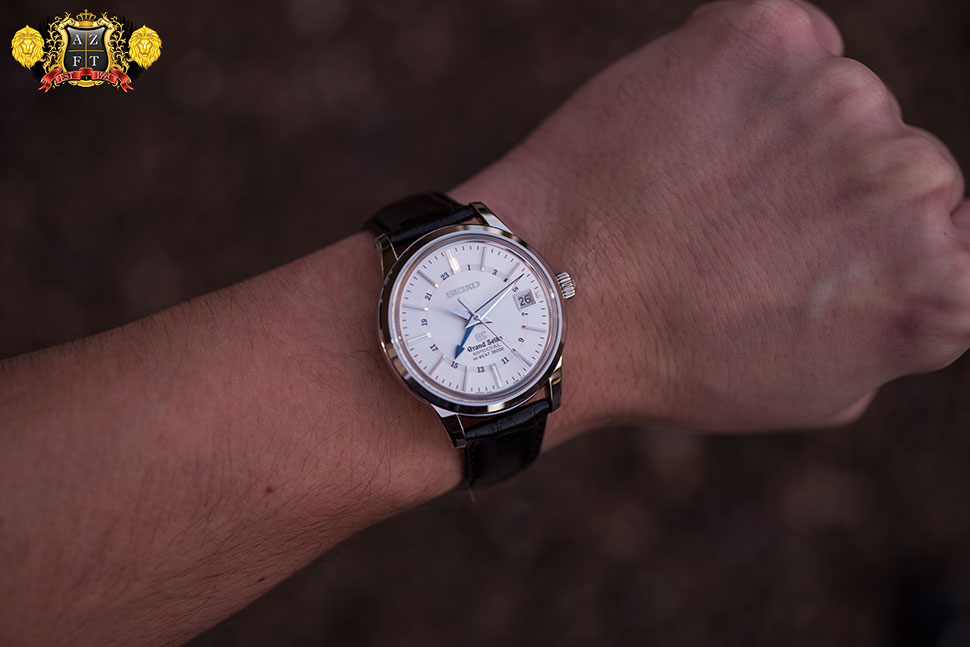 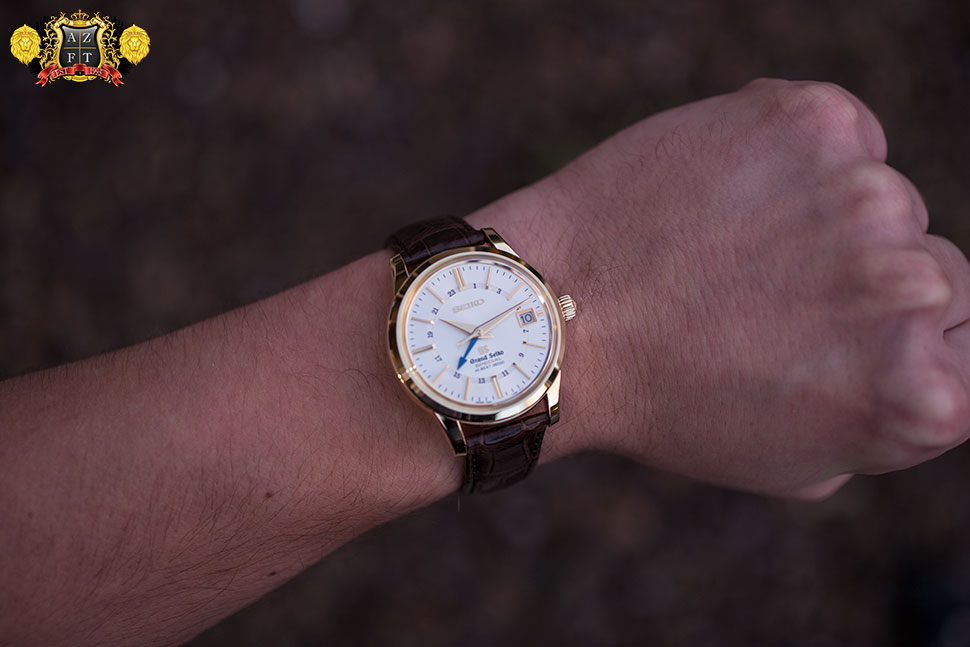 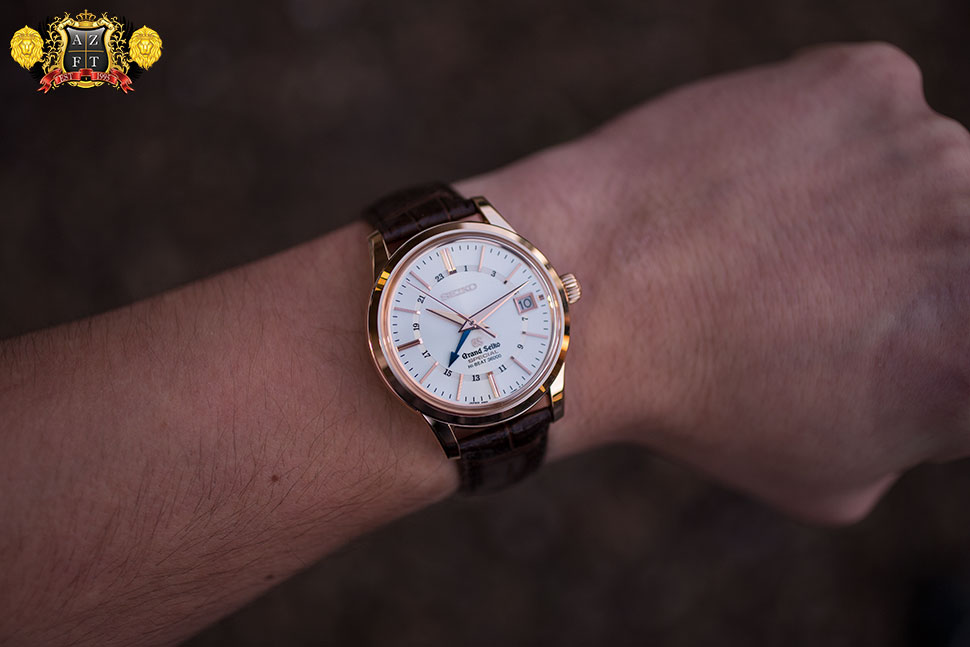