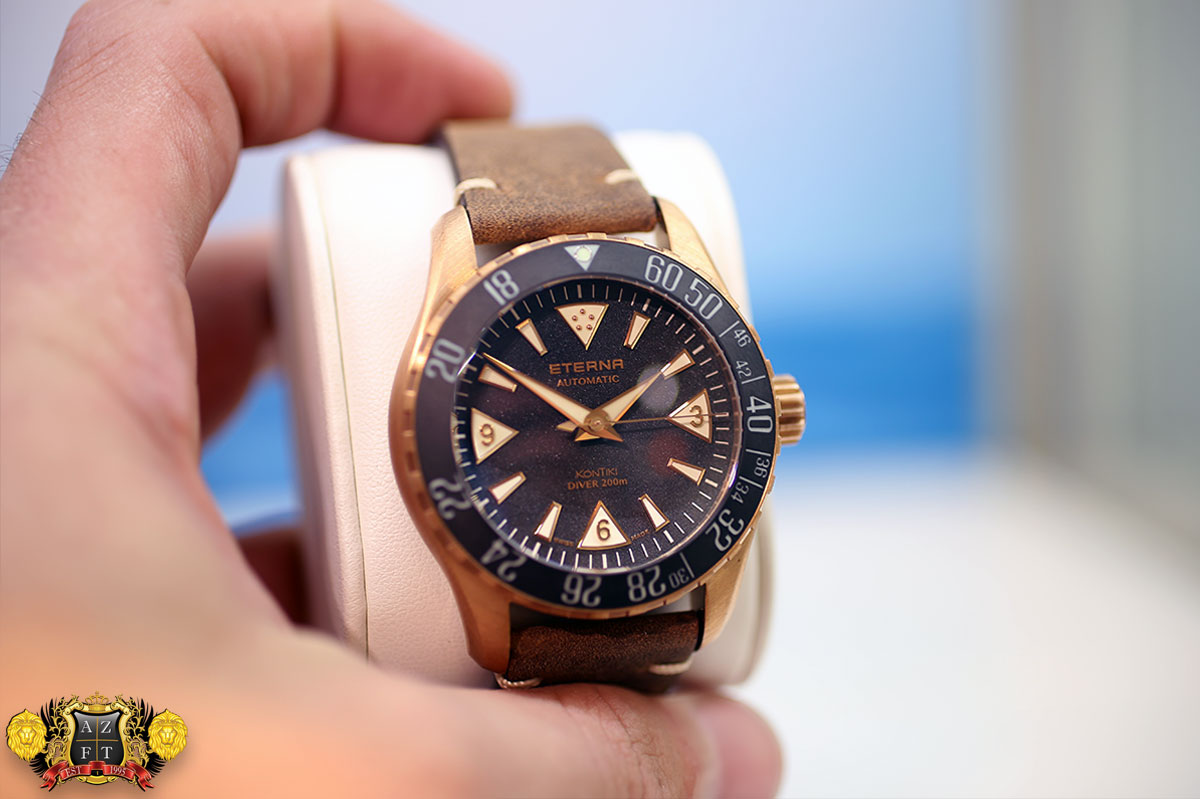 Today, we had the unique opportunity to go hands on with one of the industry's most exciting releases of the year: The Eterna Kontiki Bronze Limited Edition 1291.78.49.4122. Initially, this model was introduced at Baselworld 2017, however no retailer was able to actually acquire any to sell until early 2018. We at Arizona Fine Time were extremely lucky to acquire 10 of these models, with only 300 produced for the entire world. Let's take an in-depth look at what the Eterna Kontiki Bronze really has to offer to the consumer.

The Kontiki Bronze Limited Edition was produced to commemorate the announcement & 70th anniversary of Thor Heyerdahl's Kontiki Expedition. Heyerdahl sailed from Callao to Polynesia with a crew of six men and almost no supplies. The crew relied on Pacific winds and currents to propel them all the way to Raroia in French Polynesia. On each crew member's wrist was an Eterna watch, contributed by the company specifically for the expedition. Upon reaching Raroia, all crew members were pleased to discover their pieces were running as smoothly as ever, unaffected by water, moisture, salt corrosion, and temperature variations. Now that we've covered a bit of the backstory, let's get down to the watch itself. 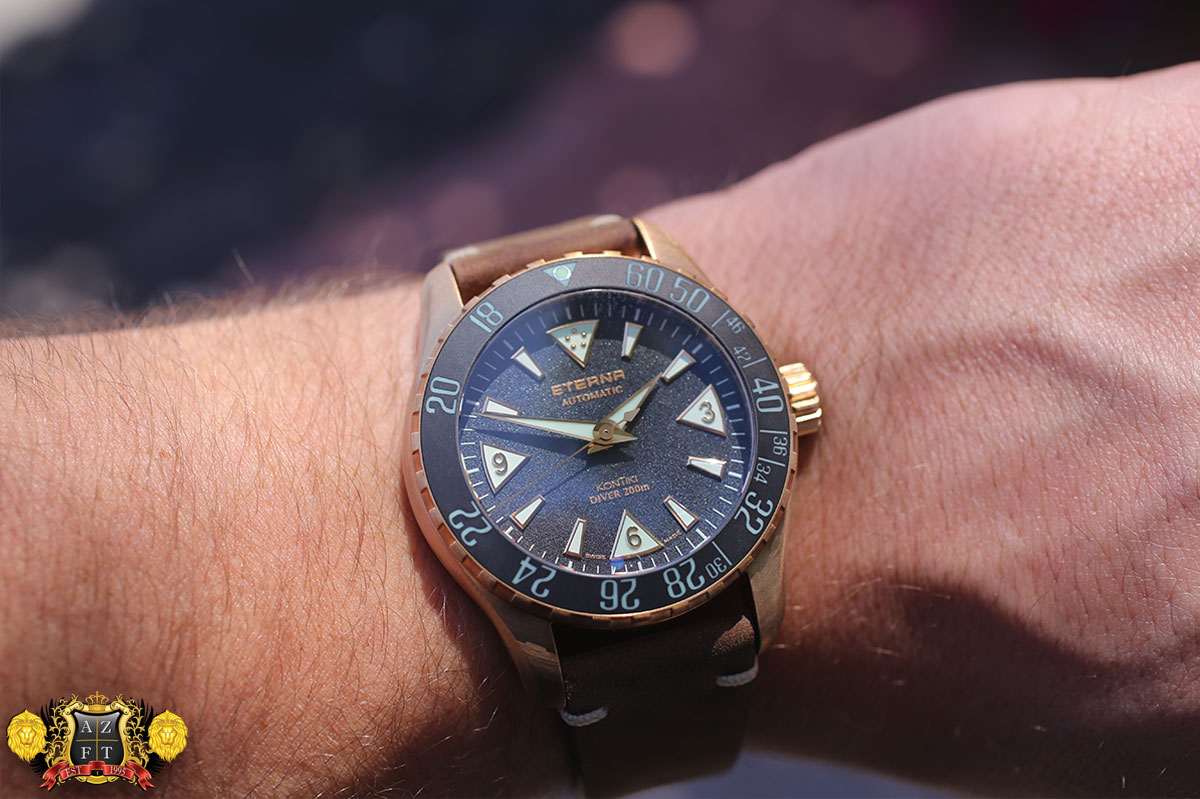 The Kontiki Bronze boldy presents itself in a 44mm bronze (copper and tin) case, and uses an alloy without aluminum, making it more resistant to turning green like so many bronze pieces do in such little time. A charcoal gray, granite-patterned dial provides incredible contrast to the triangular luminescent (Super LumiNova) hour markers at each quadrant on the piece. I imagine this will provide an extra "leg up" to anyone taking this piece on a dive, or just sporting it in complete darkness.

While on the subject of diving, the Kontiki Bronze has a water-resistance of 200 meters, and a unidirectional rotating bezel adorns the dial with a no-decompression limits scale, giving any diver a useful aid in the event their diving computer malfunctions. This scale signifies the exact amount of time a diver can spend at a particular depth before having to decompress. 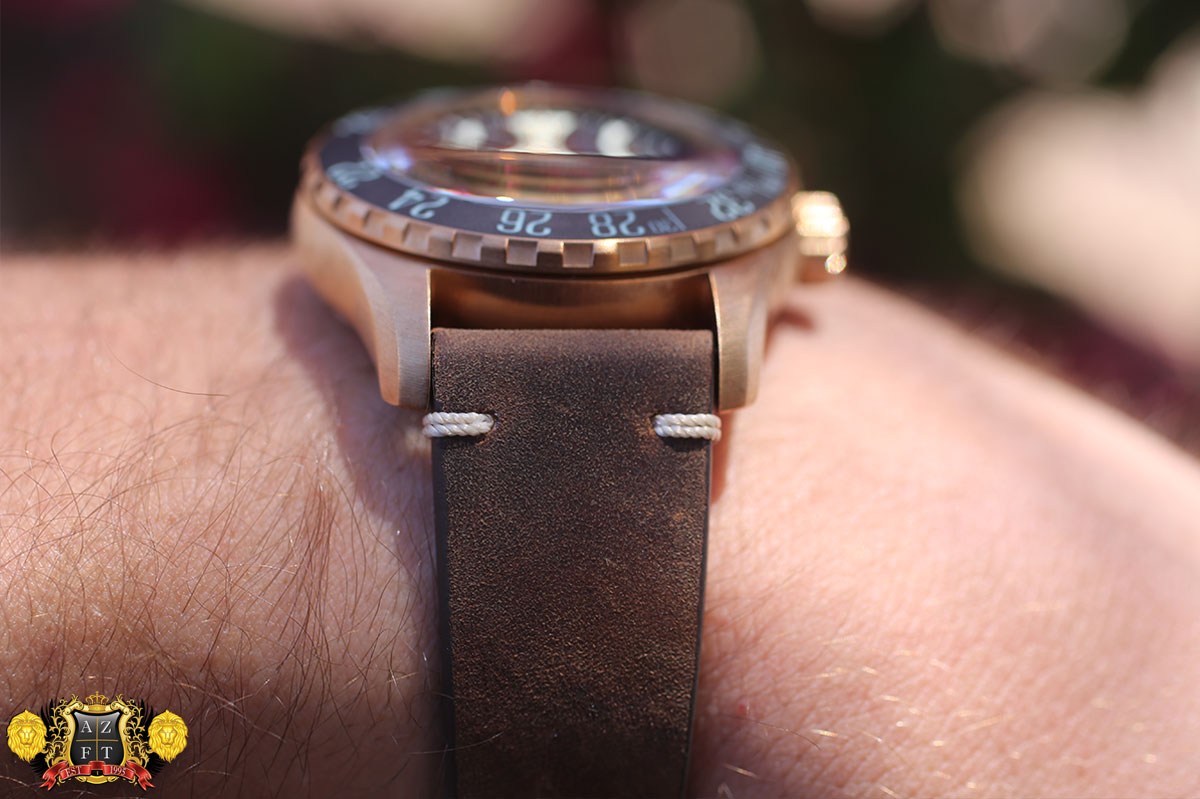 When you really take the time to carefully examine the Kontiki Bronze, you'll find this watch also doubles as a utilitarian piece, not only because of it's decompression scale and ultra-contrasted legibility, but also because of the tack-stiched, tastefully rugged brown leather strap. Tack-stitching provides additional durability, safeguarding the band from potential wear or added stress. It's indeed a practical feature, but also provides an almost accidental asthetic that comes off as quite pleasing, especially at a quick glance. The strap measures out to 22mm with a bronze pin buckle that has Eterna logo in mid-matte black.

The Eterna Kontiki Bronze contains an in-house 3902A automatic movement that beats at 28,800 bph and contains a power reserve of 65 hours. This Caliber 39 movement is part of a unique family capable of everything from a manual time-only, to a GMT, to a triple date chorongraph, and more! There are 88 total permutations in the Caliber 39 family, and it's all thanks to Eterna's master watchmakers in Grenchen, Switzerland.

For a bronze Swiss Diver with an in-house movement, the $2,950 price point is really a no-brainer. In all, The Eterna Bronze Kontiki Diver is a piece that far surpasses expectations and passes the taste test with flying colors. With only 300 produced for the world, it's strongly recommended that you secure your piece sooner, rather then later. Any of our Arizona Fine Time watch experts at will be happy to help with any questions you may have. Call us now! 1-800-486-3996